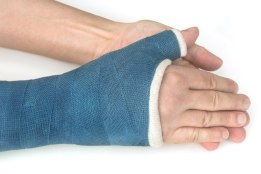 Mary is a typist, a role she has done for many years. After over ten years with a company she took the plunge and joined a new employer four months ago because they offered a higher salary.

However, a few weeks after starting her role she had an unfortunate accident at home and she broke her hand after a construction materials fell onto it. She needs both a cast and physiotherapy to recover, but a full recovery is expected in 7 to 9 months. Until then while she is not able type she may be able to do some work .

Not unsurprisingly Mary’s new employers are sympathetic but since her role is as a typist are concerned they cannot accommodate her absence from work for up to nine months and are considering dismissing her from employment. Aware that apart from any discrimination or procedural errors a dismissal would be very unlikely to be unfair – let alone that as she has not been employed for the two years necessary to make a claim – Mary wants to argue that her hand injury is a disability as that will give her more grounds upon which to challenge her threatened dismissal.

Disability is a protected characteristic under the Equality Act 2010 and so, if Mary’s hand injury were  disability, Mary would have a right of redress against a dismissal (although that is not to say she would win a claim).

The UK Law is itself based on EU Law, specifically Council Directive 2000/78/EC . Although not defined the European Court of Justice (ECJ) in the case of Chacón Navas  explained that disability amounts to

“a long-term limitation which results in particular from physical, mental or psychological impairments and hinders the participation of the person concerned in professional life.”

Clearly, an inability to type is a normal day to day activity but is also central to Mary’s professional so if this is a ‘long term limitation’ Mary can be disabled. So what does long term mean? Schedule 1 Part 1 of the Equality Act 2010 defines a long term impairment as one that is “likely to last for at least 12 months.”

The UK Government’s Equality Act Guidance on the meaning of disability explains ‘likely’ “should be interpreted as meaning that it could well happen.” So, Mary’s prospects of suggesting that she is disabled in the acct will depend on whether an employment tribunal found that her hand condition ‘could well’ be an impairment that lasted for twelve months or more. Given that the evidence is that it will last for just 7-9 months it does not look like Mary’s prospects of establishing she is disabled are very good.

However, as a union representative I would, faced with this situation make sure that the employer is forced to make a decision that the individual is not disabled by setting out the view that a condition could well continue to effect the employee for more than twelve months and that the employee is disabled with the corresponding obligations that that places on an employer. This is because good employers will as a matter of best practice give the benefit of the doubt to an employee if there is uncertainty and, even if the employer does refuse to accept this then this can be used as a basis of future challenge.

Temporary Incapacity can be a disability

However, it seems to me that the 12 month period of impairment may well be suspect. In Daouidi v Bootes Plus SL, which was a preliminary reference from the Spanish national courts, the CJEU considered whether in a situation similar to Mary’s a person could be disabled because of a temporary incapacity and decided that she might be.

The claimant, Mr Daouidi, had recently started working for a restaurant (Bootes Plus SL) when he had an slipped at work and dislocated his elbow, this accident prevented him from working. Mr Daouidi was absent from work. Approximately 7 weeks after the accident Mr Daouidi was still absent from work and because there was no clear information about when he would recover Mr Daoudi was dismissed from his employment and he challenged the dismissal in Spanish courts, with one of his grounds being that he was disabled even though he was expected to recover within an indeterminate timescale.

Some six months later when appearing before the Spanish judges Mr Daouidi still had his arm in a sling and the judges wondered whether this could amount to  long term condition. As the EU court often does in preliminary ruling the court did not decide the case so we do not know whether Mr Daouidi was found to be a disabled person.

However, two things are of note in the judgement. First, the fact that a condition is temporary or in the nature of an accident (such as a dislocated shoulder) does not itself mean the condition cannot be a disability.

Second, it remains the case that the term “long term” remains undefined but the court did not demur that an injury that lasts 6 months and interferes with professional life could not constitute a long term condition (even though they did not state it was). The court also observed that

In short, “long term” should normally be given a uniform interpretation so that, for example, long term should mean the same in the UK (while the UK remains subject to the EU that is) as in Ireland, Spain, France etc. Interestingly, it appears that after the CJEU the Spanish Courts did in fact find that Mr Daouidi was disabled because of a long term injury even though on the test in the Equality Act 2010 he would have been unlikely to have met the definition of long term this set out.

The UK legislation that defines “long term” as likely to last 12 months or more has the advantage of certainty but it seems to me it is not an inviolable requirement and a person such as Mary may be a disabled person under Directive 2000/78 even though they may not under national law that was enacted to implement the directive.

So, would Mary be disabled? Possibly.