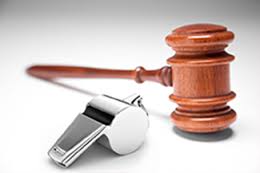 A scenario: Sarah, who is an employee, suspects that the company’s finance officer is ‘cooking the books’ by skimming company funds into his personal accounts having come across a printed document left on the printer in the office.  Concerned about this Sarah reports her concerns to the company’s HR director and explains that she thinks the finance officer who assures her she will investigate and handle the situation.

The following week the worker applies for a promotion opportunity in the company and on the 19th September is told her application is unsuccessful, the reason given is she is not a ‘good fit’ for the role and there were other better qualified candidates.

Unknown to Sarah the HR director and finance officer are good friends. Without investigation the HR director decided that there was no substance to allegation of theft because, being a friend, he knew that the finance officer was a person of impeccable character. And upon hearing that Sarah had applied for promotion and was about to be offered the role the HR Director directed the interviewing officer not to give Sarah because she was a troublemaker but to tell her she was simply not the best candidate for the job.

Distraught, the one week later ater collecting her thoughts Sarah files an Employment Tribunal claim alleging that the rejection of the job was a detriment for whistleblowing.  After discovering her allegation had not been investigated Sarah also reports the alleged theft to the Police. Their investigation reveals the finance officer had been stealing from the company for many years and he is convicted and imprisoned for theft.

Sarah’s complaint to the Employment Tribunal would be a claim under section 47B of the Employment Rights Act 1996 (the ERA) which stipulates that a “worker has the right not to be subjected to any detriment by any act, or any deliberate failure to act, by his employer done on the ground that the worker has made a protected disclosure.” On the facts as set out above Sarah would have a strong case that she was subjected to a detriment for having made a protected disclosure. However, section 48 of the of the ERA directs Employment Tribunals that they “shall not” consider a complaint unless the claim is submitted within three months of the “the date of the act or failure to act to which the complaint relates” (section 48(3)(a)). For Sarah that act complained about is the failure to promote her, and that happened on 19 September. Therefore, the three months would expire on 18 December.

There is clearly an unfairness here; soon after Sarah was aware of the claimed unlawful act she initiated proceedings but despite the clear evidence that she has acted quickly and was penalised for blowing the whistle on a serious matter she would appear not to have any legal redress for the wrong done to her.

It was this precise issue that was addressed by the Employment Appeal Tribunal in  McKinney v London Borough of Newham [2014] UKEAT 0501_13_0412. The claimant had submitted that the time limit for making a complaint detriment because of whistleblowing ran from the point he became aware of the detriment (in his case, when he received an outcome through the post), not the day the grievance outcome (the alleged detrimental treatment) was sent. Clearly, without any real enthusiasm, the EAT at paragraphs 6 and 7 found the effective date in which to submit a claim begins on the date the detriment takes place “whether or not he is aware that a detriment has been suffered”:

(6) It seems to me that the current state of the authorities is less than satisfactory.  Nevertheless, a clear thread is now emerging (see Mensah; Virdi; Garry; Warrior Square) which points towards the counter-intuitive position that time begins to run against the Claimant relying on a detriment, both under the Employment Rights Act and the Equality Act whether or not he is aware that a detriment has been suffered.  I agree that the wording of section 48(3) Employment Rights Act is focused on the employer’s action (or omission) and that a detriment may be suffered without the Claimant being aware of it.  For example, a difference in treatment which may be on the grounds of race (see Garry).  Indeed section 48(4)(b) provides that a deliberate failure to act shall be treated as done when it was decided on, not, I would add, when the Claimant learned of the omission.  That is consistent with the Mensah line of authorities in relation to the employer’s act.  Whilst the need for knowledge is reinforced by the Supreme Court in Barratt when considering the effective date of termination I accept that section 97(1)(b) Employment Rights Act raises a different question from section 48(3).  The Claimant is entitled to know that he is dismissed before the dismissal takes place.  He may suffer a detriment without that knowledge.

(7)           In these circumstances, and being unimpressed by Mr O’Dempsey’s public policy argument, I am driven, without enthusiasm, to accept Ms Balmer’s submissions as a matter of construction and authority.  The Employment Judge was right to treat time as running from the date of the Respondent’s grievance decision, 8 October.  By way of analogy, time runs for bringing an appeal to this Tribunal from the date the Employment Tribunal Judgment is sent to the parties, not when it is received by them.  Thus, the section 47B complaint was out of time.  The Employment Judge went on to consider the reasonable practicability escape clause and rejected it (paragraph 32); there is no extant appeal against that ruling.

On the basis of the legislation I think the EAT are right but it is clearly an unpalatable state of affairs that can lead to injustice and gives employers an opportunity to discriminate against whistleblowers and still evade legal scrutiny. I do not know if this decision is being appealed but it seems to me that in a case such as Sarah’s she has been deprived of her right of legal redress that potentially raises Article 6 ECHR issues (along similar lines to that advanced in Williams v Ministry of Defence [2012] UKEAT/0163/12/JOJ.

The clearest change that needs to be effected, it seems to me, is for section of 48 of the ERA to be amended so as to align itself with section 123(1) of the Equality Act 2010. Although the time limit provisions in the ERA are nearly identical to those in the EA 2010 an out of time claim may be allowed where it is just and equitable to do so, a provision the ERA omits. The Court of Appeal has accepted that whisteblowing protections are anti-discrimination laws (see Ezsias v North Glamorgan NHS Trust [2007] EWCA Civ 330). Relying on the House of Lords’ finding that there is a public interest in discrimination cases being heard set out in Anyanwu and Another v. South Bank Student Union [2001] UKHL 14 LJ Kay commented that “in my judgment the same or a similar approach should generally inform whistleblowing cases” (paragraph 32). And so, were an out of time whistleblowing claim allowed to because it was “just and equitable” to do so then there would be a strong public policy reason to allow the claim to proceed. In short, Sarah would have a good chance of getting her day before the Tribunal.

The difficulty is that the construction of the right to lodge a claim in the ERA does not permit an Employment Judge to hear such a claim – that needs to change. If it doesn’t then whistleblowers will be deprived their right to challenge unscrupulous employers.

For reps wanting to understand whistleblowing law I recommend a visit to the Public Concern at Work website.