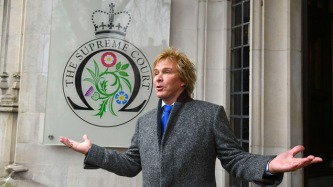 The biggest employment law story this week is the Supreme Court’s decision in Pimlico Plumbers v Smith, a case I have alluded to previously.

To answer the question in the title of course Mullins is nothing of the sort. Before we get into the specifics it’s worth remembering how the case originated. A person (Gary Smith) contracted to work for Pimlico (and who did so exclusively) dad at that time done so for 6 years. He had a heart attack in January 2011 and sough to reduce his availability for work from five to three days.   In March 2011 they refused that request and this was the basis of the entire claim. Irrespective of the legalities that is a ludicrous, unreasonable and oppressive decision by Pimlico Plumbers. Be that as it may in appealing an Employment Tribunal judgement to the EAT, Court of Appeal and ultimately to the Supreme Court Charlie has done a service to UK workers.

I do not want to discuss the legal reasoning in detail, this has been done extensively already by those more qualified than me, the best I have come across is this analysis by Sarah Fraser Butlin.

However, what I do think is helpful, even if not wholly novel, is the emphasis that the mere existence of a ‘substitution clause’ does not by itself mean a person cannot be a worker or employer for the purposes of Equality Act 2010.  The Supreme Court  set out that it would consider the dominant feature of the contract, which in this case was Mr Smith’s personal performance of work:

The tribunal was clearly entitled to hold, albeit in different words, that the dominant feature of Mr Smith’s contracts with Pimlico was an obligation of personal performance. To the extent that his facility to appoint a substitute was the product of a contractual right, the limitation of it was significant: the substitute had to come from the ranks of Pimlico operatives, in other words from those bound to Pimlico by an identical suite of heavy obligations. It was the converse of a situation in which the other party is uninterested in the identity of the substitute, provided only that the work gets done.

Whilst not ground breaking – the judgement itself was broadly conservative – I think this is a helpful reiteration of the law. An employer cannot rely on ‘sham’ or trivial contractual arrangement to avoid their workers obtaining rights of readdress as workers or employee (in the Equality Act sense).

By way of analogy, in the in the 1970s and 1980 many landlords sought to introduce sham requirements of their tenants (such as the right of a landlord to share accommodation, or even the same bed) not because of any desire to do so but because this would make the agreement a license rather than lease which attracted much lower degrees of legal rights. And so in the 1985 House of Lords case of Street v Mountford the emphasis was on the reality of the arrangement not just what the contract said. It did not decisively matter if a contract says it is a ‘license’ it could still be a lease. Likewise, even if a contract says there is a right of substitution – which if effective – would be likely to take a person outside of the protection to employment law does not mean there is one, or that it is a dominant feature of the contract and the courts will examine the realities of the contract ‘on the ground’. That is not a new development but it is a helpful reminder that even if a contract tells a worker they have no rights that doesn’t make it so.

One final aspect of the case to briefly comment upon is its supposed status as a gig economy case. Charlie Mullins has certainly been on the airwaves telling anyone who will listen that it was not and that Smith received a income of £80k. Darren Newman has said something similar: “It is also worth emphasising that this case really has nothing to do with the gig economy. Pimlico Plumbers (however this case eventually turns out) were providing reliable,  regular and well-paid work to their plumbers. True gig economy cases tend to turn on whether there is any obligation to provide work at all and this case says very little about that.”

On the subject of the case itself  Newman is undoubtedly right, but I do think this case is of some significance for the gig economy legal landscape – notwithstanding the right to supply work issue raised the right to substitution is very much relevant and will be an aid in future case (a case in point is the CAC’s 2017 Deliveroo decision).

So, all in all, by no means a monumental decision but a helpful one nonetheless. And Charlie Mullins is left with egg on his face which is also a plus.